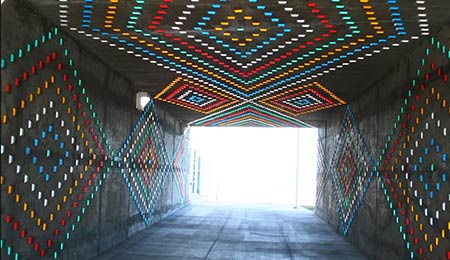 As you drive, you will see reflective raised pavement markers marking the road. They are also known as reflective road studs and cat eyes because when you get close to them they look like cat eyes on the road and they originated from England in 1933.

The cat's eye is a so-called reverse reflection safety device that reflects light back to the light source (your headlamp). Initially, they were used only in the middle of the road, where a cat's eye placed four glass balls inside a white rubber dome, two facing each direction of the road. The dome is mounted in a cast-iron housing, and as the rubber flows through it, the rubber deforms and sinks into the housing, where a stationary wiper cleans the glass sphere. Normally, the road studs are sturdy, but on 25 April 1999, Kemistry, a famous British drum and bass DJ, was killed when a van was removed from the metal housing of the studs and it flew through the windscreen of the car, in which she was a passenger. Later, the traditional cat's eyes were gradually replaced by reflective road raised pavement markers or solar road studs.

Reflective road raised pavement markers come in a variety of colors. How do drivers identify the right lane by color at night?

White - they mark the lanes or middle of the road.
Yellow -mark the other side of the road, marking the central reservation and preventing you from unconsciously changing lanes to the right.
Red - These indicate the left-hand side of the carriageway and show a “line that should not be crossed”.
Blue - these mark the location of fire hydrants or municipal water supplies and are installed by the local council.
Green- mark the edge of the main carriageway at lay-bys and slip roads.

The color meaning of above road surface protruding sign is for reference only, the road traffic of each country has different regulation, but general direction is same, can provide reference.