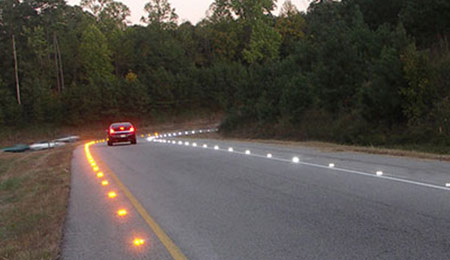 Road studs act as a sound and sensor to inform the driver that they are driving out of the driveway. They can be used with a rumbling soundtrack, which is a corrugated line that makes noise when the driver is driving on it.
Road studs and road tracers are designed to provide clear, unambiguous outlines of road markings. They provide visibility to attract the driver's eyes as a permanent sign, which will have a positive effect on driver driving even in adverse visibility conditions, such as rain, fog, and darkness.
The purpose of the road stud is to help drivers see the lane better and faster, especially when it rains. With different types of road studs and tracers, different results can be expected.

In the past few decades, solar technology has made great progress, and outdoor lighting is one of the biggest beneficiaries. Gone are the days of the small drop of light emitted by the early solar lights. Today, external solar lighting comes in a variety of shapes and sizes that can benefit not only homes and gardens, but also commercial systems. From niche garden installations, roads and bicycle lanes, to high-beam street lights and safety lighting, outdoor solar lights can meet a variety of requirements and bring great benefits.

Smart solar road studs have been invented, such as a flashing blue road stud, which only activates at temperatures below 3 degrees Celsius, which is the temperature at which ice may form. Other suggestions for road studs include smart timing, which allows drivers to determine their distance from vehicles in front. For example, when a car passes a road post, it changes color within a few seconds before it changes back.