In the 2018 National Civilized Cities Assessment Results and Ranking just announced, Jinan ranked first among the 28 provincial capitals and sub-provincial national civilized cities. The standardized intersection traffic order reflects the humanistic spirit of the city. Jinan traffic police has always adhered to the "people-oriented" intersection traffic design principle and continuously improved the sense of security of the people.

For example, at non-light-controlled intersections, to ensure pedestrian crossing safety, Jinan traffic police introduced induction inductive solar smart zebra crossing road stud. At non-light-controlled intersections, cameras are installed to sense pedestrians. When pedestrians are detected to pass through the intersections, the controller sends out a wireless control command. The smart road stud light up after receiving the street crossing instruction, and the visible distance is more than 300 meters, leaving more time for the driver to respond. When the pedestrian completely crosses the zebra crossing, the intelligent road stud will go out automatically. 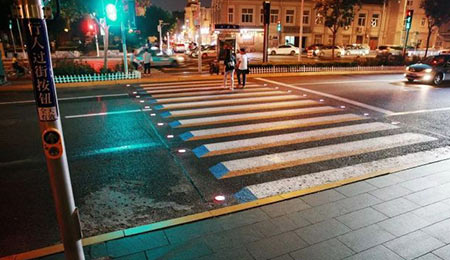 The innovation of this product lies in the use of "Internet of Things + new materials" technology.

In the past, some products on the market used cables to transmit pedestrian crossing signals. The smart road studs themselves needed leads. When installing the intelligent road stud, the roads need to be cut and routed, which will cause great damage to the pavement. The lines laid across the streets will also be subject to flooding. And vehicle rolling damage, system stability is reduced. Some road studs in China on the market are solar powered, but ordinary solar panels are very easy to break under pressure, causing the product to fail to supply power and cannot work.