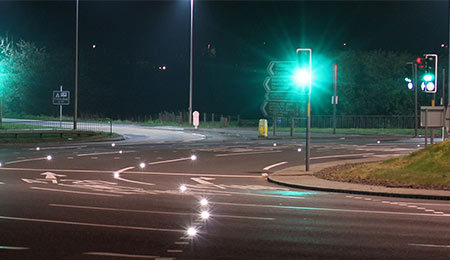 Smart "cat's eye" solar road studs will be used for the first time at motorway junctions in north-west
England in response to changing traffic signals.

When traffic lights turn green, the LED road studs light up so drivers can clearly see which lanes they
should follow. Cables under the road are connected to traffic lights by nearby automatic controllers.
The road stud on motorway can be seen from as far as 1,000 metres away - far more than traditional
reflective cat eyes - and have been shown to help stop drivers drifting between lanes, reducing the risk
of collisions.

As part of A £3m project,England will install around 170 innovative LED road studs to improve travel
and safety at Switch island on merseyside, where the M57, M58 and three a-roads connect. It is one of England's busiest motorway hubs, with more than 90,000 vehicles in use every day.

Motorways England has installed LED road studs to guide drivers through the sindhead tunnel in surrey, but this is the first time they have connected to a traffic signal at a motorway junction.