In 2013, there was a traffic accident on Gaolang Road in Wuxi. In just one and a half minutes, nearly 20 cars collided in series. The reason was that a car broke down suddenly, the visibility on the viaduct was not good, and it was snowy, insufficient braking, and reduced friction coefficient, causing a rear-end collision. Now there is a slogan in the field of intelligent transportation that I think is very good, that is, smart cars and smart roads. Our research has always emphasized that smart cars alone are not enough, they must be smart on the road. In the case of Wuxi, it can be seen that the car does not know the road conditions, how slippery the road is, and how the braking distance changes. Moreover, this is a curve, and all automatic driving technologies now focus on straight line detection, and the problem of curves needs to be considered.

Therefore, when we pay attention to the intelligentization of vehicles, we cannot ignore the intelligentization of roads. However, since the road has been paved for more than 100 years, the fixed form has not changed. The road is to provide vehicle travelers with uniqueness in time and space, and no other changes have occurred. The road infrastructure services are very single, and the functions of the safety facilities are single. A sign is only a reminder. Safety facilities are inflexible. We hope that the future smart transportation and smart road infrastructure will be multi-functional and controllable. More importantly, since the development of intelligent transportation for so many years, road information is still one-way transmission. We can't just watch the traffic accidents happen, and can't provide warning information to the backward vehicles, and can't prevent the occurrence of secondary accidents. It can be said that the current roads and road networks have not reached the level of true intelligence. 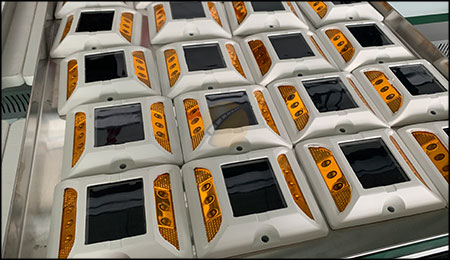 It can be found in other developed countries that ordinary road studs have become a very important safety infrastructure for road traffic. For example, the United Kingdom uses embedded cat-eye road studs. Common road studs are mostly used in China. Due to quality or use problems, it is difficult to use them for a long time. When we studied, we wondered whether we can use the large-scale, high-density, and distributed deployment of road studs as a carrier, just like human skin, making the road studd with sensors and making the road stud a sensory neuron. The smart road stud was born, which is the third generation product. 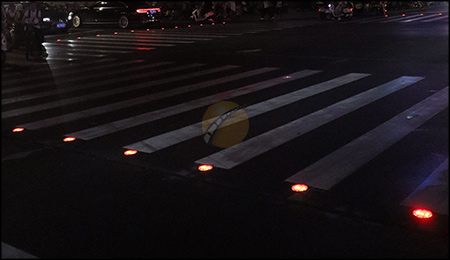 A smart road stud is a small thing, but in fact it is composed of two parts. One is the front-end sensing unit, which uses built-in sensors and processors to sense traffic flow, vehicle speed, parking assistance, water accumulation, and icing. The second is communication technology, which integrates Bluetooth technology and can be connected seamlessly. It has the corresponding illegal parking, traffic accident detection, and vehicle queue length detection, which can collect and integrate data information. On the platform side, using intenlligent road stud and other auxiliary facilities, such as reflectors, or using video and microwave, can form an event judgment function, such as whether there is congestion, whether there is stagnant water, whether the road is icy, and perform some melting. Handling of ice and guidance of traffic. Provide a data input interface for future vehicle-road collaboration.

We have a lot of communication with the traffic police. They said that because of the difficulty in getting electricity and the lack of signal lights in the urban-rural fringe, there are many traffic accidents. In Songbei District of Harbin, there will be one traffic accident every day on average. We built a safety warning system for sharp bends and steep slopes based on the actual situation. We also use intelligent road studs to warn pedestrians when going out of curves because this accident happened. Often some cars just drove out without paying attention. 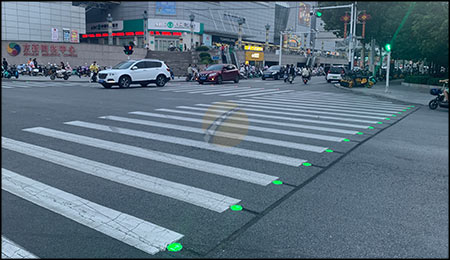 The other is a level crossing, which is also in the Songbei District of Harbin. There are frequent traffic accidents at this level crossing. There are many reasons, such as line-of-sight, vehicle speed and other comprehensive factors. We put smart road studs and control, detection and warning into one solution.

For Smart road studs, in addition to a simple warning function, it can also assist in reminding and controlling the driving distance. There are often rear-end collisions on highways because the driving distance is not well controlled. In many traffic incidents, due to the inability to feel the situation ahead in time, a car broke down and stopped, the car behind did not know it, and the braking time was not enough to cause a second accident. It is also possible to use the perception ability of road studs and wide-area Internet of Things communication to give corresponding warnings to backward vehicles that have stopped abnormally. We are also conducting research on the application of smart road studs in smart tunnels and group fog warnings.
Back
Welcome to Australia National Road Traffic Expo 2019-08-14
Multiples Application Modes of NOKIN Solar Road Studs 2021-09-22