After nightfall, walking on the Jinggangshan Avenue in Luanchuan County, as long as you step on the zebra crossing, the "circle lights" at the foot will project a shining red light, "guarding" pedestrians safely through the zebra crossing.Jiangxi City is installed the first pedestrian crossing heat sensing system is to remind the driver to slow down before driving to the zebra crossing. The "round light" is the wired solar road stud. 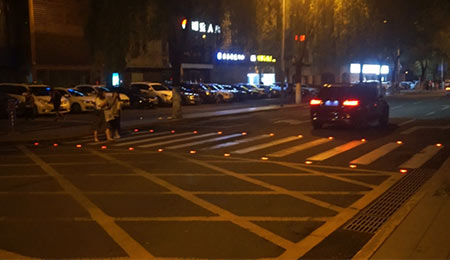 The solar road stud which we are familiar with are all used alone. Solar panel absorb solar energy and
convert them into electrical energy and store them in batteries or capacitors. When night falls, they
release electricity for solar road studs. But with the development of technology, more and more
country combines solar road studs with traffic lights to form an intelligent transportation system, also
known as the "Smart Zebra Line."

The smart intersection is mainly composed of an infrared pedestrian detector, a flash warning road
stud light, and an impermissible pedestrian capture device. When the system detects that pedestrians
and non-motor vehicles cross the road, the video detection will transmit the signal to the flashing
road stud light through the control system to form a red warning light strip to remind the vehicle to
greet the pedestrians actively;When the vehicle speed is fast and does not avoid the pedestrian passing the zebra crossing, the induction system will start the aerial video probe for video evidence collection, and punish the illegal vehicle according to the evidence collection data.

Mr. Li, who is doing business near Jinggangshan Avenue, told reporters: "In the past, there were only zebra crossings, no traffic lights, and there were a lot of passing cars. They were also flying fast. Every time they crossed the road, they were frightened. Since the installation of the solar road stud that automatically sense pedestrians, We all feel safer."