The Benefit Of Solar Pavement Studs In South Africa Road 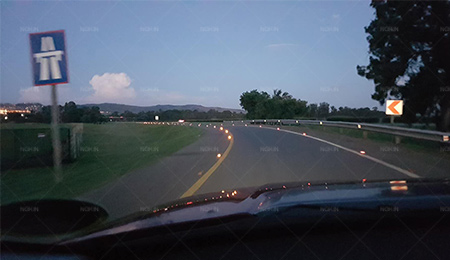 Accidents originally installed on the R66 by Ulundi and Melmoth have been reduced. Dr
Mbanjwa,department of transport in South Africa, announced the results of a two-year large-scale
pilot project on one of the country's most notorious routes, saying that the introduction of solar
pavement studs in South Africa has reduced serious accidents and Number of road deaths: During
the seven months prior to the installation of the new solar studs, 88 serious accidents occurred,
killing 27 people and 15 lighter accidents. Nothing has happened on this section of the road since
installation. Report of the accident. The cost of 103 accidents was $ 3.3 million, while the solar studs
cost $ 600,000. "

Logan Maistry of the Kwazulu-Natal DoT said: "Some of the benefits of smart solar pavement studs
include improved road contours, which are especially effective in bad weather conditions. They also improve driver visibility and improve their ability to make sharp bends, stationery vehicles or lane changes. "

Many factors are driving political commitment to adopt ITS technology, such as these smart solar pavement studs, including South Africa's fourth highest road mortality rate on the continent. But another major factor is that when South Africa hosts the World Cup, a large number of tourists are expected to flood into the country. Dr Mbandeva said that various initiatives of the Ministry of Defence have failed to resolve the situation on the road. It turns out that the latest measures using solar studs in south africa can effectively improve road safety and greatly reduce accidents and casualties.

Since its first installation in 2005, DPS has installed more than 55,000 solar studs on the roads in KwaZulu Natal. These installations have reduced accidents by an average of 70%, making the province one of South Africa's leading governments in reducing casualties, and the current Road Traffic Steering Committee has confirmed the use of solar studs to continue to reduce road accidents. Installations have also taken place in Nigeria, and the technology has brought similar benefits.