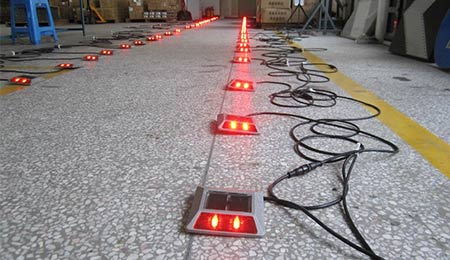 Nowadays, road lighting systems are widely regarded as essential for controlling traffic flow in many applications. Typically, such systems work well above the surface of the road and use a variety of well-known and widely accepted colors (such as red, amber and green), especially light orientation, to convey a clear and unambiguous message to drivers, thus improving road capacity while improving safety. On busy roads, traffic is always in the lanes, so clear lane markings are essential. In crosswalks , the situation is exactly the same and the lighting system must operate with the highest possible reliability for the benefit of all.

The air lighting system has many disadvantages. At extremely complex intersections, sometimes it is difficult to know which lights are which. In direct sunlight, the reflection of the light may make it almost impossible to tell which particular light is actually illuminating; Conversely, if the sun happens to be behind the light, it is hard to see it. In addition to these problems, drivers actually have to look away from the lane to see lights in an emergency (especially in unfamiliar situations), which can compromise vehicle safety.

Recently, some new dynamic road studs have become the choice of road designers. These products have the same advantage as the new studs - they give the driver information from the road itself, where the driver should look. There are now two options: solar powered road studs that absorb energy from the sun during the day and provide lighting at night; And wired road studs, powered by cables that buried in the road.

Obviously, solar road studs work only where there is actual sunlight, and use a small battery to store the energy so the studs can work for a week or without sunlight.They have been specifically designed with road safety in mind and can help to prevent serious accidents and emit rather than reflect light. Solar powered road studs are also known as solar raised pavement markers, solar reflective lane markers and solar warning devices.

Wired road studs can be used to indicate a variety of conditions, including icy or dangerous roads (blue lights flash), but must be very low-power, so visibility during the day is poor. Optional cable-driven road studs bury wires and road studs in a very large grooves. Physically connect the wires to the road stud, and then fill the entire interconnect assembly with the pavement material. These wired road studs are expensive and costly to install and replace. But they do have the ability to give motorists the information they need.