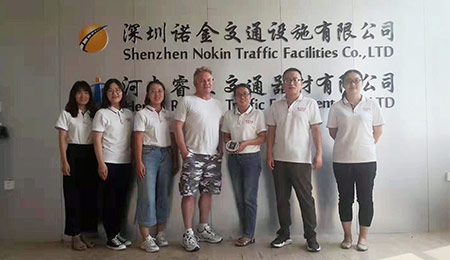 Solar road studs are dramatically improving driving safety on roads around the world. Compared to the traditional "cat's eye" road reflector or lines painted on the side of the road, it has a significant improvement in visibility at night or in bad weather. In addition, the next generation of road stud light is being tested. These can be automatically lit to warn of bad weather or bad traffic ahead, or they can help reduce highway congestion by automatically marking extra lanes to increase capacity.

NOKIN Traffic is a research and development, production and sales as one integrated enterprise. NOKIN LED road stud are now use in Brazil, Saudi Arabia, France, Australia and South Africa. Since the installation of solar road stud, road safety authorities have in some cases reported a reduction of more than 70 percent in nighttime accidents. Nokin's vision is to reduce casualties and congestion on roads worldwide by safely increasing the capacity and efficiency of the road network.

NOKIN road stud light is completely self-sufficient. It stores the energy collected during the day by solar panels, and then has a built-in light-emitting diode that lights up automatically after dark, giving drivers up to 500 meters of visibility. Reflective road studs rely on being illuminated by the headlights of approaching vehicles and have a maximum range of 90 m. Nighttime corners without any outline are certainly less visible. When driving at 100 km/h, NOKIN solar road studs increase visibility and response time from 3.2 seconds to about 30 seconds.