Solar road studs to illuminate roads without grids. Each road stud marker has its own solar collector and LED light, plus a microprocessor that manages the power, so two hours of sunlight can provide them with enough power to illuminate for ten days. As a result, even in bad weather, the visibility of the road one kilometer ahead is 10 times that of the reflector illuminated by the headlights. They come in two types: raised and flush. This technology, which has been used in Europe for many years, quickly spread to the world. 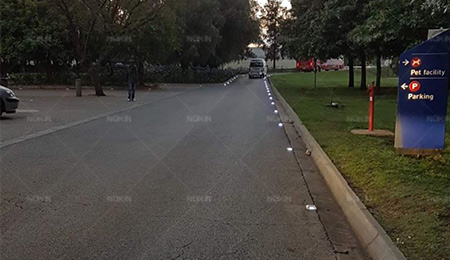 So, do they making difference? At present, solar road studs have been installed in more than 120 places in the United Kingdom, the Netherlands, France, Australia and South Africa. Local authorities who installed road stud markers reported a 70% reduction in traffic accidents at night. Automotoportal has some statistics showing improvement in road safety in countries that using solar road studs.

The latest generation of "smart" solar road stud can also be remotely controlled by traffic control systems. During rush hours, you can light up to indicate open lanes or warn of traffic accidents or congestion ahead. Strings of hard-wired pins can flash in sequence, showing the direction of communication. So far, tests in the Netherlands and Scotland have shown the great potential of the system.

At present, almost all the world has begun to use solar road studs. China is also one of the major producing areas. The use of solar road studs in China is mainly combined with traffic lights on the zebra crossing to form a set of intelligent systems. At this time, solar road stud markers will flash frequently to remind vehicles to slow down and avoid pedestrians. After the pedestrian passes, the solar studs will go out.