Careful citizens of Shandong may find that a few days ago, solar reflective road studs were added to the road junctions on both sides of Dongsan Road. Even at night and in rainy and foggy weather, vehicles can pay attention to crossings to enter and exit the vehicle to avoid traffic accidents. At present, the Municipal Urban Management Bureau has installed a total of 120 solar reflective road studs at 39 intersections on the east and west sides of Dongsan Road, effectively solving the hidden danger of traffic safety at invisible intersections, and protecting the public Travel safety. 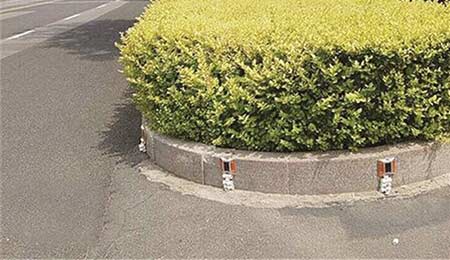 These solar road studs are naturally charged by the sun.As soon as it starts getting dark the LED lights in the stud come on automatically each night for up to 10 hours. They have been specifically designed with road safety in mind and can help to prevent serious accidents and emit rather than reflect light. Solar reflective road studs are also known as solar raised pavement markers, solar reflective lane markers and solar warning devices.

Solar road studs to illuminate roadways without a power grid. Each stud contains its own solar collector and LED light, plus a microprocessor that manages power so that two hours of sunshine gives them enough power to illuminate for ten days. The result is road visibility up to a kilometer ahead -ten times further than headlights can reach reflectors, even in bad weather. Solar reflective road studs come in both raised and flush styles with a variety of colors. This technology, in use in Europe for years. 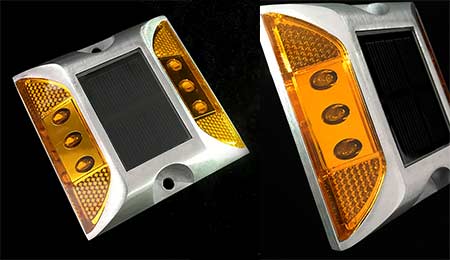 The advantage of solar road studs compared to reflective road studs is that they can self-emit, and the visible distance is as long as 500 meters. There is also a reflector on the top of the LED lamp. Even if the lamp bead is damaged, the reflector can continue to be used. Play a warning effect.