In the second half of 2005, Haikou introduced solar powered cat eyes in road reconstruction, concentrated in Longkun South Road, Fengxiang Road, Qiuhai Avenue, Yuehai Avenue and other intersections and intersections, in the night, star-shaped cat eyes on road in the dark night very beautiful, and more importantly, it plays a role in inducing traffic. However, in less than a year after it was put into use, large-scale destruction began. During the visit, the reporter found that the solar cat eyes at the end of Fengxiang East Road were basically not flashing, and the Qiuhai Avenue and the Yuehai Road were only scattered. 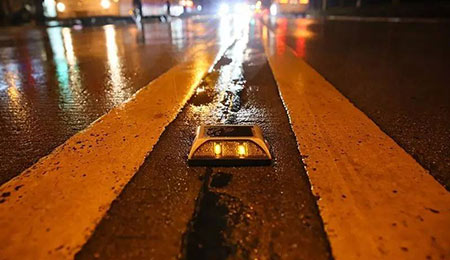 The working principle of the solar powered cat eyes can be simply summarized as: during the day, the solar panel absorbs sunlight and converts the solar energy into electric energy. At night, the electric energy in the energy storage device is automatically converted into light energy, and the road outline is deduced by emitting light.

Compared with ordinary reflective road stud, solar cat eyes have two most important features: First, the brightness of the light is large, more than 10 times that of ordinary reflective cat eyes; such high-intensity light can break through the rain and fog at night, safely and effectively guide the driver. The second is active illumination, which flashes at a certain frequency at night, and the dynamic warning effect is strong. Active illumination not only avoids the interference of rain and fog to the greatest extent, but also can be separated from the dependence on the car's lighting. The visible distance is farther and the effect is better. 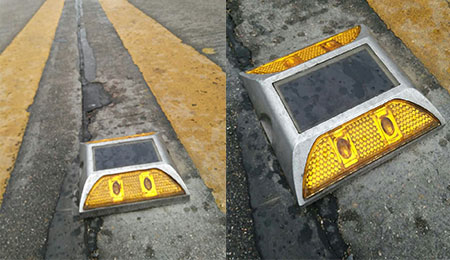 The head of the Haikou Traffic Management Department said in an interview today that the current status of solar cat eyes is caused by two reasons. First, artificial crushing and destruction, and second, ash on the solar cat eyes surface, it is difficult to absorb energy.

However, the solar powered cat eyes construction party told reporters that the solar cat eyes design has a service life of five years, and there are so many damages in less than one year. The reasons are manifold. First of all, ash is not the cause, because the rain wash and the vibration of the road can make it self-cleaning. The illegal behavior such as overloading and overspeeding has caused great damage to the pedestal of the cat eyes on road, which makes it unable to work normally. In particular, some road markings have changed, and the chances of solar cat eyes on road being crushed have increased.

The Haikou police appealed that the solar powered cat eyes on road has a good effect on the induction of the road. It is hoped that the majority of the friends of the aircraft will pay more attention to maintaining a good traffic environment. With the development of science and technology, many new types of solar cat eyes have appeared in recent years, and the compression effect is also better.