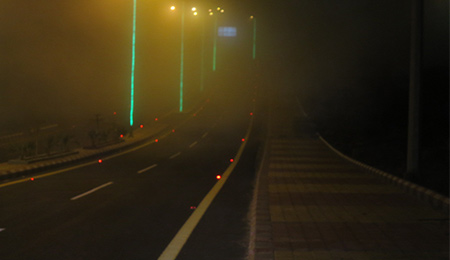 Mass fog is affected by the local microclimate environment. In the local range of tens of meters to hundreds of meters in heavy fog, more dense fog groups with lower visibility appear. Due to the difficult forecast and strong regional fog, it is difficult for vehicles to be notified or warned in advance, which often results in driving into the regiment fog area without having to slow down at all, often causing major traffic accidents. Therefore, the group of fog is called the "mobile killer" on the highway.

In some foreign countries, solar LED road studs are installed on the entire highway, and the driver is warned by the work of LED road studs to effectively avoid the threat caused by the fog.

A customer installed solar LED road studs on the highway. Our staff accompanied by the customer went to the highway to check the use of the highways solar road studs which were installed. It just happened to take a picture of the working condition of the solar LED road studs when the fog appeared: The concentration of the yellow fog is very high, which obstructs the driver's view.  The LED of the solar road stud flashes at high frequency, and the penetrating light can pass through the dense fog. Clearly outline the road to remind drivers to drive safely and increase their attention. At this time, we found out how important the work of highways solar road studs is for the drivers who drive off the mass fog.