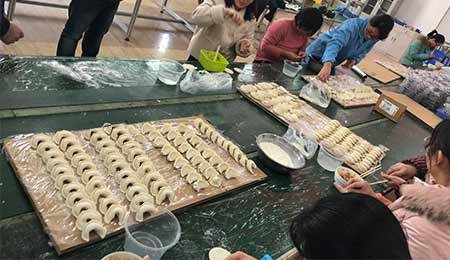 NOKIN Traffic is the manufacturer of solar led cat eyes in China, on 21th Dec, Nokin's employees celebrate the winter solstice festival together. We make dumplings to celebrate this festival and this warm everyone's heart in the cold winter day.

Being a traditional holiday as well, it is still now celebrated quite often in many regions. Early during the Spring and Autumn period, 2500 odd years from now, Winter solsticewas first determined as the Chinese traditional solar term among the total 24 terms. In Gregorian calendar, it is around Dec 22nd or 23rd.

Midwinter day is the very day in North hemisphere with the shortest day and longest night year-round. After it, daytime will become increasingly longer and the coldest clime will invade all the places on the Northern part of the globe. We Chinese always call it "JinJiu", which means once Winter solstice comes, we will meet the coldest time ahead.

As the manufacturer of solar cat eyes, The solar led cat eyes of NOKIN Traffic have been exported to more than 20 countries in the world. The good working atmosphere and warm humanistic care make Nokin's team better and stronger.