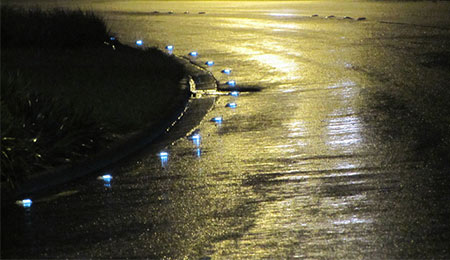 Effective division of road space is a key element of safe driving environment. Painted lane markings provide visual cues for the enhancement of road edges, enhancing drivers' ability to predict road curvature, reduce lateral displacement of their vehicles, and adjust their position and speed appropriately based on road characteristics. Thus, painted lines may help reduce vehicle loss of control and non-road crashes, and indeed, the presence of edges and centerlines helps greatly reduce road crashes. Improve driver safety performance indicators, however, it is best to use painted lines in conjunction with other treatments such as raised road marker, rear-mounted contours and herringbone for best results.

At night, reflective raised markers (such as those called 'cat eyes') send light from the vehicle's headlights back to the driver. "Passive" road studs have been used for decades. In recent years, with the development of light-emitting diode (LED) technology, Solar LED road marker for commercial use have been introduced and manufactured. Led-based road marker perform better than reverse reflectors because they can be seen over longer distances and wider viewing ranges and in less visible conditions such as rainy and foggy days.

Researchers have run simulations that compare driving at night on country roads under three conditions: on unlit roads, on roads whose curves are illuminated by typical road lighting, and on roads with solar LED road markers. On a subjective level, participants rated the led studs marker and luminaire status as safer, more comfortable, and more controllable than the off-highway status. The conclusion is that installing solar LED road markers on roads increases the driver's ability to control the virtual car, compared to unlit roads or illuminated road.

In short, in situations where cat eyes are not illuminated by headlights, they could potentially help drivers predict the road. In addition, Solar led-based road markers can achieve some traditional road lighting functions, such as visual guidance, at much lower energy costs.

Back
Welcome to Australia National Road Traffic Expo 2019-08-14
Do Solar Pavement Studs Is A Effective Alternative To Street Lights ? 2020-01-03