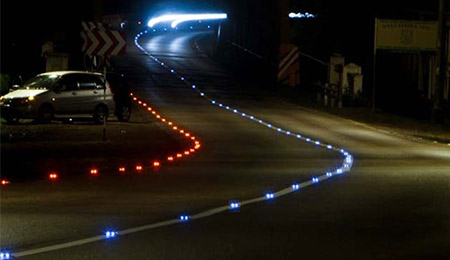 According to the Florida Department of Transportation, new solar pavement markers are expected to be installed on curved portions of St Johns Avenue to reduce crashes in the area.

Neighbor Al Eaton said: "There are two blind spots here. If you don't limit the speed, of course, it is very easy to accident."

Residents said lowering speed limits, signs or even flashlights would not have much impact on drivers. We don't think they are familiar with the road, and they don't realize how steep the curve is. We just think they are in a hurry. Drivers may not be prepared for the number of pedestrians in the area. Runners often walk around the street. In the morning they are pedestrians, which is dangerous.

A total of 15 accidents have occurred on the route over the past five years. Six of them were injured and nine were sunk, causing property damage.

Most crashes occurred near Montgomery Square-sharp turns-the driver lost control and left the lane. The government hopes that the installed solar led pavement markers will improve security in the area. Solar led pavement marker are small discs that emit stable or flashing light. They are new tools the government has decided to try to improve visibility and reduce lane departure debris on so-called road "S" curve segments.

The solar led pavement markers are a good solution for both safe and sustainable infrastructures, providing superior distance visibility of the road layout ahead.Solar pavement markers are proven to increase night time road safety. Providing a view of the road layout ahead in the driver's natural line of vision and well beyond the headlight beam of a vehicle.