If you work at Philippines, coincidentally you are in the road traffic industry, you must know that a very famous solar pavement levelled marker studs in Philippine, this solar studs also be well knew as G105 solar road studs. 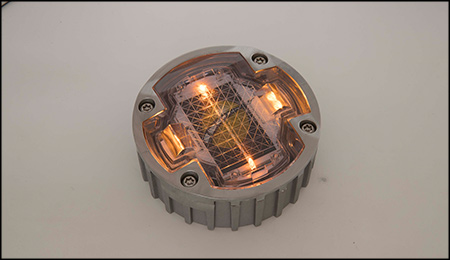 The solar pavement levelled marker studs is a internally illuminated device, solar studs are a good solution for both safe and sustainable infrastructures, providing superior distance visibility of the road layout ahead. Internally illuminated solar pavement levelled marker studs activate at the beginning of twilight. Once daylight will exceed a certain light intensityin the morning, the lightning will turn off and the battery starts charging. They maintain light outputs throughout a full annual cycle and are proven to increase night time safety.

In a country where roads and transportation are challenging, one must always ensure the safety of drivers, passengers and even pedestrians. More often than not, accidents happen during night time, as pedestrians and road users often suffer from decreased visibility in the dark.

The solar studs G105, is an internally illuminated solar pavement levelled marker stud made with the highest quality of materials. It is a flashing solar cell powered LED maintenance-free lighting device that illuminates the roads and highways to guide vehicles and ensure the safety of pedestrians along the way.

The advantages of this solar studs G105 from NOKIN group: