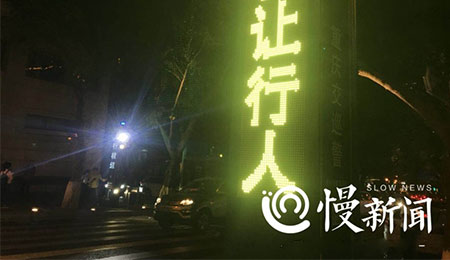 Its working principle is to trigger the differential detector when a pedestrian passes the zebra crossing. The controller recognizes the differential detector signal and sends it to the control circuit. The control circuit processes the signal and outputs a trigger signal, and then drives the solar road studs on both sides of the zebra crossing to flashing. , Remind pedestrians and vehicles at intersections, which can greatly reduce the occurrence of traffic accidents.

The inspector of the "smart zebra crossing" system introduced that this "smart zebra crossing" is also called an automatic pedestrian crossing early warning system with geomagnetic induction, video detection, solar flashing road studs, scrolling screen display, voice prompts and other functions. When there is a vehicle passing at the front(about 50m away), the geomagnetic induction transmits the signal to the control system, and the voice broadcast system will remind pedestrians to pay attention to avoidance; when pedestrians and non-motorized vehicles cross the road, video detection will pass the signal to the flashing road studs through the control system. Those solar flashing road studs form a "beautiful color" warning light band to remind vehicles to actively show courtesy to pedestrians.

Yin, a student at Qiujing Middle School, said that previously there were only zebra crossings, no traffic lights, and they were careful when crossing the street. There were no street lights during the self-study next night. After the solar LED road studs light installed, it feels safer and more convenient.