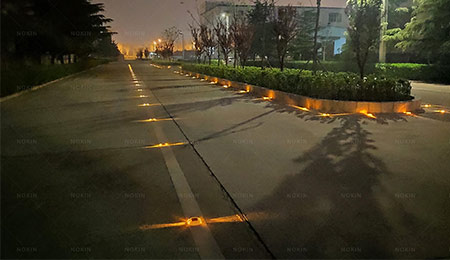 These solar cats eyes road studs will be naturally charged by the sun. Once it gets dark, the LED lights in the solar road studs will automatically light up every night for up to 10 hours. They are designed with special consideration for road safety and can help prevent serious accidents and emit light instead of reflecting it. Solar cats eyes road studs are also known as solar raised pavement markers, solar reflective lane markers and solar warning devices.

Solar cats eyes road studs can effectively mark nerve areas such as pedestrian lanes, traffic islands, bends, and roundabouts. NK-RS-X5 solar road stud is suitable for driving. It is designed to be installed flat on the road, and is not dangerous for two-wheelers.