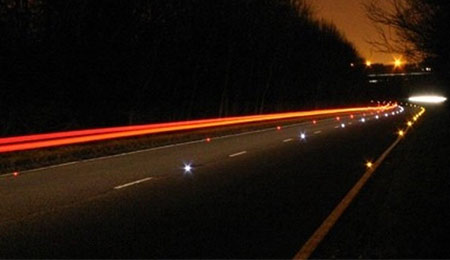 Road studs are becoming more and more common in our lives. With the development of science and technology and the changing needs of the market, there are more and more types of road studs. International development has opened up a way for future solar road studs. Here's a look at what the next generation of smart road studs might look like.

The latest generation of smart road studs warn of dangers ahead and act as "active" lane markers to reduce congestion. Preliminary trials have been carried out successfully on the busiest motorways in the Netherlands and Scotland.

The next generation of smart solar-powered road studs, which can warn of bad weather or tarrible traffic ahead, can help reduce motorway congestion and have been a huge success on Dutch highways. Two installations have dramatically reduced traffic congestion on the Netherlands' most congested motorways, while the system has also been successfully tested in Scotland's M8.

The Dutch ministry of transport has chosen solar road studs as they look for new ways to improve traffic management on crowded highways close to their capacity during rush hour. One solution is to increase road capacity by opening the hard shoulder as an additional lane during peak hours, combined with smart road studs to indicate when to open the hard shoulder as an additional "lane in".

Smart solar-powered road studs "hardwired" to traffic control rooms and lit up during traffic jams, directing traffic from the freeway's on-ramp to the hard shoulder. When the forward lane system is not in use, the illuminated stigma Outlines the additional lane and guides the driver into the main lane.