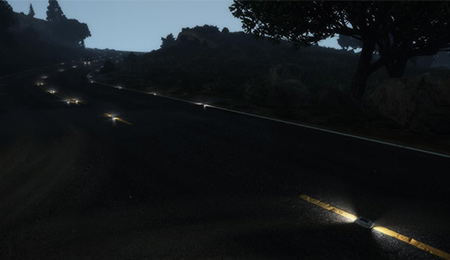 Solar led road markers are high-visibility products that can operate without power infrastructure to create a safe traffic environment.

These solar LED road studs will be naturally charged by the sun. Once it gets dark, the LED lights in the solar road markers will automatically light up every night for up to 10 hours. They are designed with special consideration for road safety and can help prevent serious accidents and emit rather than reflect light. Solar LED road studs are also known as solar raised pavement markers, solar reflective lane markers and solar warning devices.

Solar led road markers have been used in many parts of the world. According to reports, night accidents have been reduced by more than 70% after used the led road stud. High-tech solar road markers will be easily replaced or supplemented and used in conjunction with the reflectors currently in use, thereby improving road visibility and overall safety at night. Following this green method of using the sun and solar energy is an amazing solution.

Therefore, it is very necessary to use solar led road markers to light road sections in the wild without street lights. LED road studs can clearly outline the road, which gives the driver a good visual guide and lets the driver know how the road is going. To avoid traffic accidents caused by leaving the lane.

There are many types of solar led road markers. In addition to highways, these solar road marker can also be used in highways, roundabouts, sharp turns, airports, tunnels, parking lots, parks, narrow bridges and other public places.