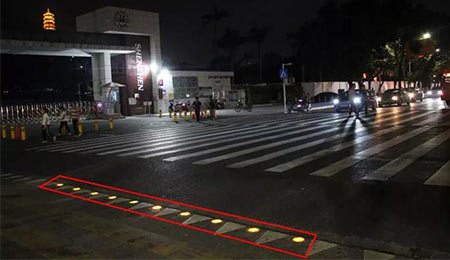 There are a lot of traffic in front of Gongming middle school. In order to let teachers, students and pedestrians cross the road in peace of mind, the light traffic bureau laid raised street crossing and installed embedded intelligent solar road stud in front of the school.

The solar road marker is installed in front of the zebra crossing in front of Gongming middle school! And equipped with an infrared thermal camera, when sensing the pedestrian's heat source, the intelligent solar road stud began to flash. The infrared thermal camera can sense the temperature range between 35℃ and 40℃, which is in line with the average temperature of human, so it can accurately identify every pedestrian crossing the street.