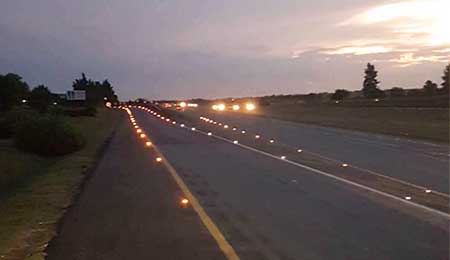 The smart LED cats eyes deployed at the A 720 Sherifhal Ring Junction in Edinburgh, Scotland, has won two separate industry awards, the CIHT John Smart Road Safety Award for the Annual Award and the 2014 Scotland Transport Award. The TSC has installed led cats eyes on a six-arm ring that connects several important routes, including A7 and A720, which can handle up to 42,000 vehicles per day.

The roundabout is controlled by a traffic light with led cats eyes sign that guides the driver through the intersection to the destination. Despite these measures, casualty statistics show that in the 10 years to 2013, Sheriffhall had a high frequency of accidents and about 65 were injured. Moreover, even a minor collision at the junction has a knock-on effect that severely disrupts the entire network

According to an independent study by the Institute of Transport at Napier University in Edinburgh, in 2015, these smart LED cats eyes had a positive impact even during the day. lane crossing rate decreases as traffic flow increases; and it is found that the driver behavior is more predictable and consistent after LED cats eyes installation. The plan also resulted in a decrease in lane crossing activity for almost all vehicle types and movements, while a significant decrease in the crossing rate for medium-sized vehicles (>50%).