Raised pavement markers come in a variety of reflective colors, some of which (such as white and yellow) have meaning that can be inferred from the drawn road line conventions. But there are other colors (such as blue and green) that can convey more information to those who know.

Some colors alert police, emergency responders, or maintenance personnel where they can find things such as disconnects, fire hydrants, or shut-off valves. Some variations even feature reversible colors, conveying different messages depending on the direction of travel. But these meanings-just like the design of cats eyes reflectors-vary from place to place.

In 1933, Percy Shaw invented Cats Eyes in Boothtown, a suburb of Halifax, England. It features a rubber and cast iron housing inside a reflective glass ball. Each unit is complex and dynamic, and its various materials are designed to serve a variety of ingenious functions.

As the car passes, the metal part of the casing protects the device and makes an audible sound, just like the Bottsz Dots. At the same time, a fixed rubber wiper clears the glass when it is pushed down the road. Cat eyes reflector are also retrograde, meaning: road reflectors redirects light back to the light source with minimal scattering, optimizing visibility when the car is driving. Today, some new versions of cat eyes are solar powered, and the energy they collect is used to fuel LED lights (instead of the old retroreflective glass eyes).

Over time, different colors have evolved for different purposes. In most parts of Europe, the usage is standardized:

White: used in the middle of the road to mark roads and islands
Yellow: along the center reserve edge (middle)
Red: Shoulders along the highway
Blue: Emergency vehicle parking (also known as drop zone) and branch roads, mainly used by police to stop and monitor passing vehicles
Green: connect or leave branch roads at intersections, entrances, and exits-sometimes used to mark minor side roads 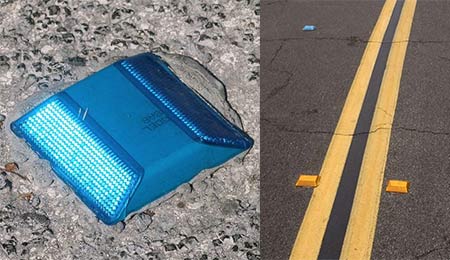 Cats eyes reflector are popular in the UK, perhaps in part because they work well in the fog, but they are not the only solution in the world. A simpler trapezoidal design can be found in many places. But the specific color-coding meaning varies from place to place, especially when it comes to less common colors and reversible variants.