Bluetooth Road Stud Were Used By Share Bike In Taiyuan 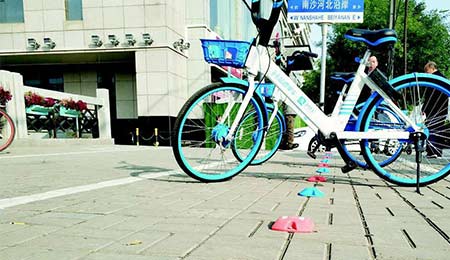 Capital of southwest China's Taiyuan municipality, launched a pilot project on Oct. 22 to install a "Bluetooth road studs" device in the parking area of a pedestrian walkway, creating an invisible "parking pile" with bluetooth identification and prompts. This means that Shared bikes must be parked in a designated area to complete the lock operation and terminate the rental charges. In the future, Taiyuan will adopt a combination of "bluetooth road stud" and human labor operation and maintenance to regulate the parking order of bicycle-sharing .

On the sidewalk on the west side of the road, a new row of small, square boxes in orange and blue has been installed in a painted non-motor vehicle parking area. According to Wang Guangrui, head of the taiyuan passenger transport office's bicycle-sharing working group, the boxes are "bluetooth road stud" with a bluetooth sensor inside that can match the bluetooth on the bike lock. The sensor distance of each "bluetooth road stud" is within 1 meter, which means that if the Shared bike is parked outside this distance, it cannot be sensed and cannot be locked for payment.

Wang Guangrui said the launch of the Shared bikes has eased traffic pressure in the city. However, the problem that the unorderly parking of Shared bikes affects the city's appearance and traffic has also become a new "urban disease". The new technology bluetooth road stud has been adopted in cities such as Beijing, Hangzhou and Nanchang. Taiyuan will pilot some roads at first, and then extend them to main roads to realize intelligent management of Shared bike parking. In the future, if citizens can see the latest parking areas and no-parking areas in the mobile APP, they will be charged a certain dispatching fee if they park their vehicles in the no-parking areas.