In the south of the Nanlin Expressway, Zhangde Road, Anyang City, a centerline light band flashing with yellow light appeared, especially at night. The reporter learned that this light strip is composed of 1,140 aluminum solar road studs , which is also the first urban road in our province to use such solar road studs on a large scale.

This section is part of National Highway 107 and is an important section to ensure the transit passage of heavy vehicles. According to incomplete statistics, there are more than 1,000 vehicles crossing the road per hour, and traffic accidents are frequent. 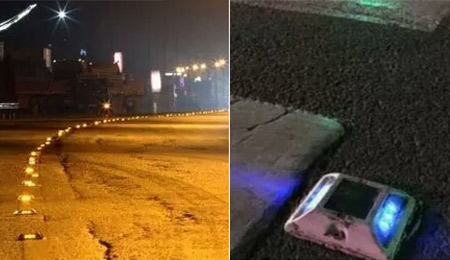 Zhu Guiyuan, Director of the Transportation Bureau of Wenfeng District: "We have to spray the marking line more than twice a year. As soon as the big car passes, the marking line will be rubbed away and disappeared soon."Since this section is a two-way, two-lane road with a narrow road surface, the central barrier is not suitable. Once a vehicle breaks down or is temporarily parked, it can cause traffic jams. After many investigations and studies, the transportation bureau of Wenfeng District decided to use solar road studs.

"This aluminium solar road stud has played a big role since it was installed. At night, the driver can identify the direction and can always remind the driver not to cross the road or overtake, especially on rainy or foggy days. The solar road studs can fully shine and function. " Zhu Guiyuan said 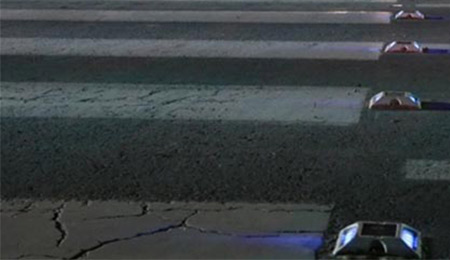 This 10cm × 10cm square aluminium road stud absorbs sunlight for one day and can release flashes for 7 to 8 days. It has a pressure resistance of> 30T, a visible distance of more than 800 meters, and can resist cold and heat. Such solar road studs have also been well received by nearby villagers and past drivers.
Mr. Wu, a villager near the road: "Since this solar road stud light is installed and the road is divided, it is safer for me to live and work here. Traffic accidents have also been reduced, which is not bad."